On December 26, the day after Christmas, hundreds of people gathered in Yokohama to say goodbye to the 100th Peace Boat Global Voyage for Peace, a very special journey for the organization that this year celebrates its 35th anniversary. This voyage will last for almost 100 days and cover a southern hemisphere route, docking in 19 ports around Asia, Africa, and South America. It will return to Japan on March 31, 2019, after visiting 13 countries. 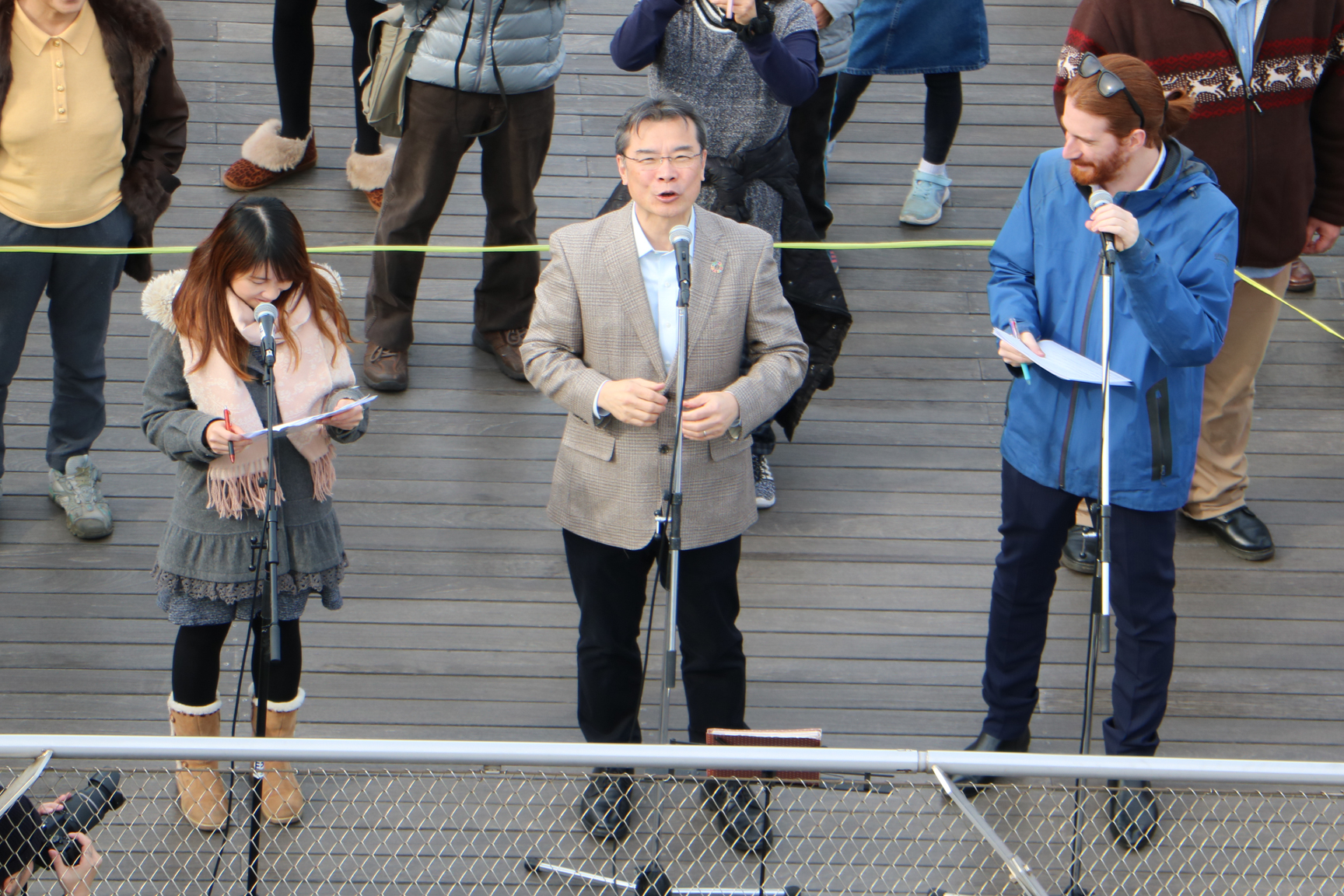 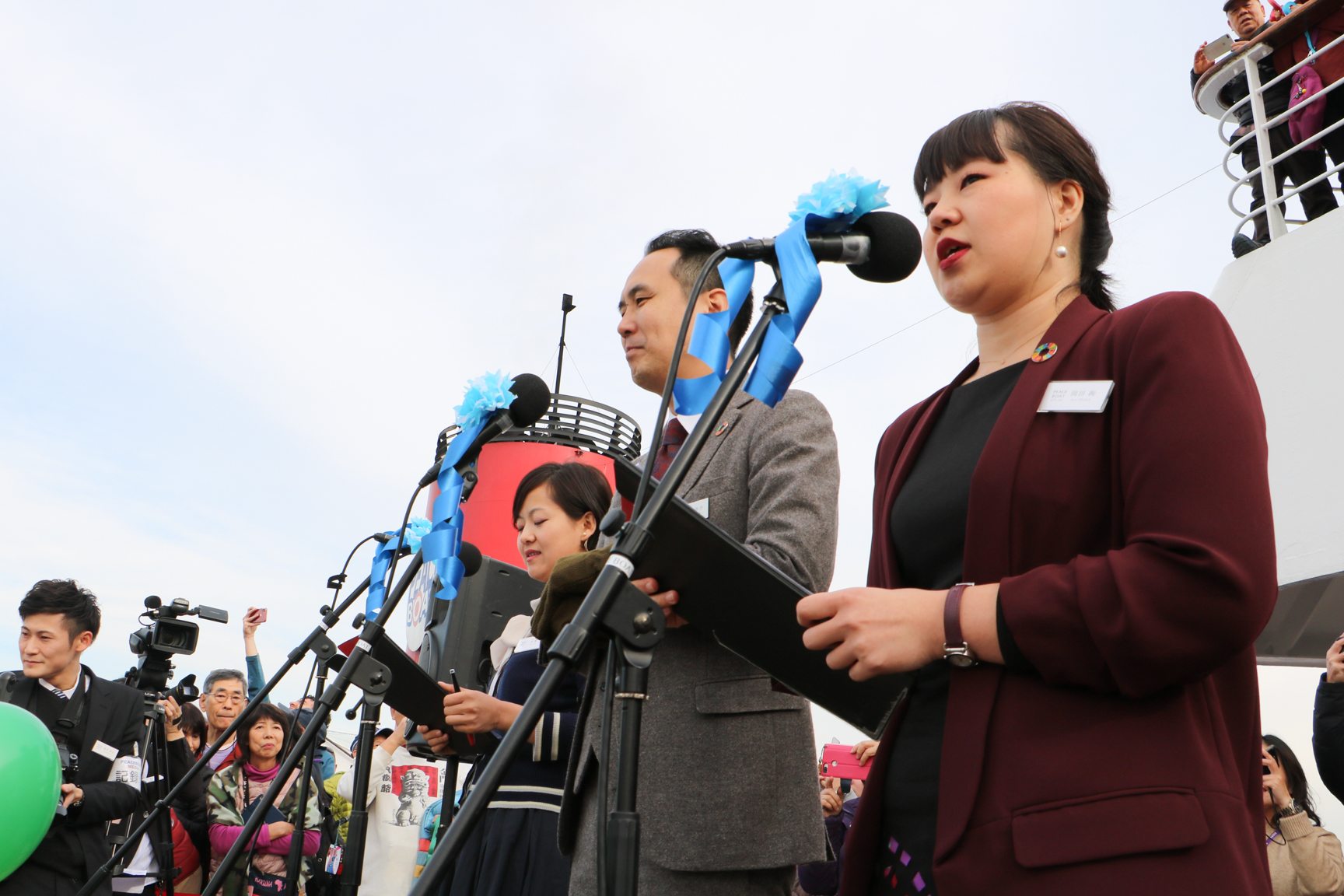 The departure ceremony took place on a sunny winter day. The director and founder of Peace Boat, Yoshioka Tatsuya, shared the origins of the NGO during the ceremony: "The first Peace Boat voyage departed in 1983 but it was only a 10-day-cruise with about 150 participants. As of 2018, the scale has already grown by about 250 times, and we have experienced a miraculous 35 years that I, even as founding member, never could have imagined. The protagonists of these miracles are the guest educators, the many ‘repeaters' and all of the participants who have joined in the past," he explained to the crowd.

During the ceremony, the director of the 100th Voyage, Yosuke Tanaka, recalled many of the aspects that make a Peace Boat cruise a unique experience. He also spoke of the importance of traveling to learn about other cultures. "More than ever I believe that real international exchange is necessary, as world affairs drastically change. Peace Boat goes beyond the interests of nations and creates real connections between people, aiming to form a society that overcomes the barriers of language and culture, full of individuals that can acknowledge and respect each other differences," he said.

To celebrate the 35th anniversary, many activities will be organized on board during the first part of the voyage, on the way to Singapore. Previous voyage directors are onboard the ship for these first few days, to talk about the history of the organization and share some of their memories. Also joining the launch of the voyage is Kawasaki Akira, a central member of Peace Boat and an international steering group member of the International Campaign to Abolish Nuclear Weapons (ICAN), awarded the Nobel Peace Prize in 2017. Before arriving in Kobe, Kawasaki lead one of the first events onboard, talking about the global situation of nuclear weapons and Peace Boat's role within ICAN. He also recalled the history of the Peace Boat Hibakusha Project, through which more than 170 Hibakusha (survivors of the atomic bombings of Hiroshima and Nagasaki) have traveled onboard the ship in the last ten years to share their testimony and appeal for nuclear abolition.

Another special project newly launched is the 'Voyage of Light,' a collaboration with the Philippine-based NGO 'Liter of Light'. This organization is a global, grassroots movement committed to providing affordable, sustainable solar light to people with limited or no access to electricity. The founder of the NGO, Illac Diaz, is onboard to carry out solar lighting systems workshops and deliver lights assembled on the ship by Peace Boat participants. Celebrating the Year of Zayed, 1,000 solar workshop kits which were part of a successful world record attempt in Abu Dhabi, UAE, have been donated by the Zayed Sustainability Prize and will be distributed in ports visited during the 100th Global Voyage. "We are very excited to join Peace Boat on such a special occasion. We will travel the world to teach, learn, and share sustainable solutions to energy poverty and other development challenges globally. With all the participants, we will create an army of solar energy ambassadors," he exclaimed.

The 100th Peace Boat Voyage will travel around the world with 1000 passengers from Japan, China, Taiwan, Singapore, Malaysia, Korea and Thailand. It is one of Peace Boat's most international voyages to date, with a recent significant increase in the number of participants from different Asian countries. Among these, the youngest is only two years old and the oldest is 92. Another curious fact is the number of repeaters, about 400, who wanted to return to the ship to together celebrate this special anniversary voyage.